My Kids Are Growing Up Too Fast...

And it's my fault. 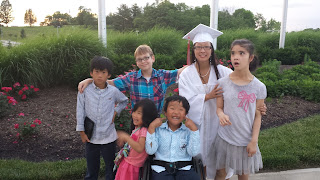 I'm not talking about video games, or television shows, or being exposed to (gasp!) someone's opinion that doesn't match mine.


Sidebar:  We spend way too much time arguing with each other.  Just look at our country over the past few weeks.  Can I just say, Enough, already!  I spend most of my time trying to teach my kids to respect other people--even when those people are different.  Maybe especially when those people are different or hold different opinions.  After all, it's when we're pushed out of our comfort zone that we grow the most.

While writing this post I've been interrupted three times to deal with such vital matters as: one child popping the bubbles another child is blowing, and then again when that same child is hitting himself in the penis.  Can we just all agree to stop popping each other's bubbles?  As for the penis issue, well I always say if it's your penis, it's your business.  Just don't smack it in the middle the driveway.  Okay?

Sorry.  I had to get that out.  Ahem.  Now on to weightier matters.

My kids are growing up too fast, and it's my fault.  I've been sick the past few days.  Not with a cold or the flu, but with Crohn's symptoms.  Our whole house pauses when I get sick.  We watch to see what my body is going to do.  Is this a time where I just feel really uncomfortable for a few days and then it resolves itself?  Or is this another hospital visit?

My kids, even the two who have only been with us one year, know the symptoms that mean I need to get to a hospital.  Fast.

I'm not there yet.  But I am feeling lousy.  I've spent the past two afternoons curled up on the couch. While I'm there, each child comes up to me and lays a hand on my forehead to check for fever.  They ask, "Is this a hospital time?"

I see the fear in their eyes and try to reassure them, but it always falls flat.  They already know Crohn's can spin out of control quickly.

Last night, my oldest son tip-toed into my bedroom at 11:00.  "I'm just checking on you," he said as he put his had on my forehead to check for fever.

You see, I don't believe it's video games, or television shows, or exposure to different opinions that are robbing my kids of their innocence.  It's knowing deep down inside of them that one day, I'll be gone.

I was twenty when my father had a massive heart attack.  He survived, but I remember how my world tilted.  I suddenly realized one day, he wouldn't be here.

And then one day, he wasn't.  I was thirty and it was still a shock.

Seven years later, my mother died suddenly.  I was thirty-seven.  I was nowhere near ready.  And though I had my own children, I wasn't a grown up until she was gone.

Parents are a scaffolding upon which children build their lives.  When the scaffolding is gone, you realize there's no one to catch you if you fall.  And that's scary.

My kids are slowly learning that now.  Each time I'm sick, a little more of their innocence is chipped away.  I would do anything to spare them from that.

Instead, all I can do is be happy that right now, they have times of bubble popping and penis smacking.

Posted by Stephanie at 9:40 AM No comments: