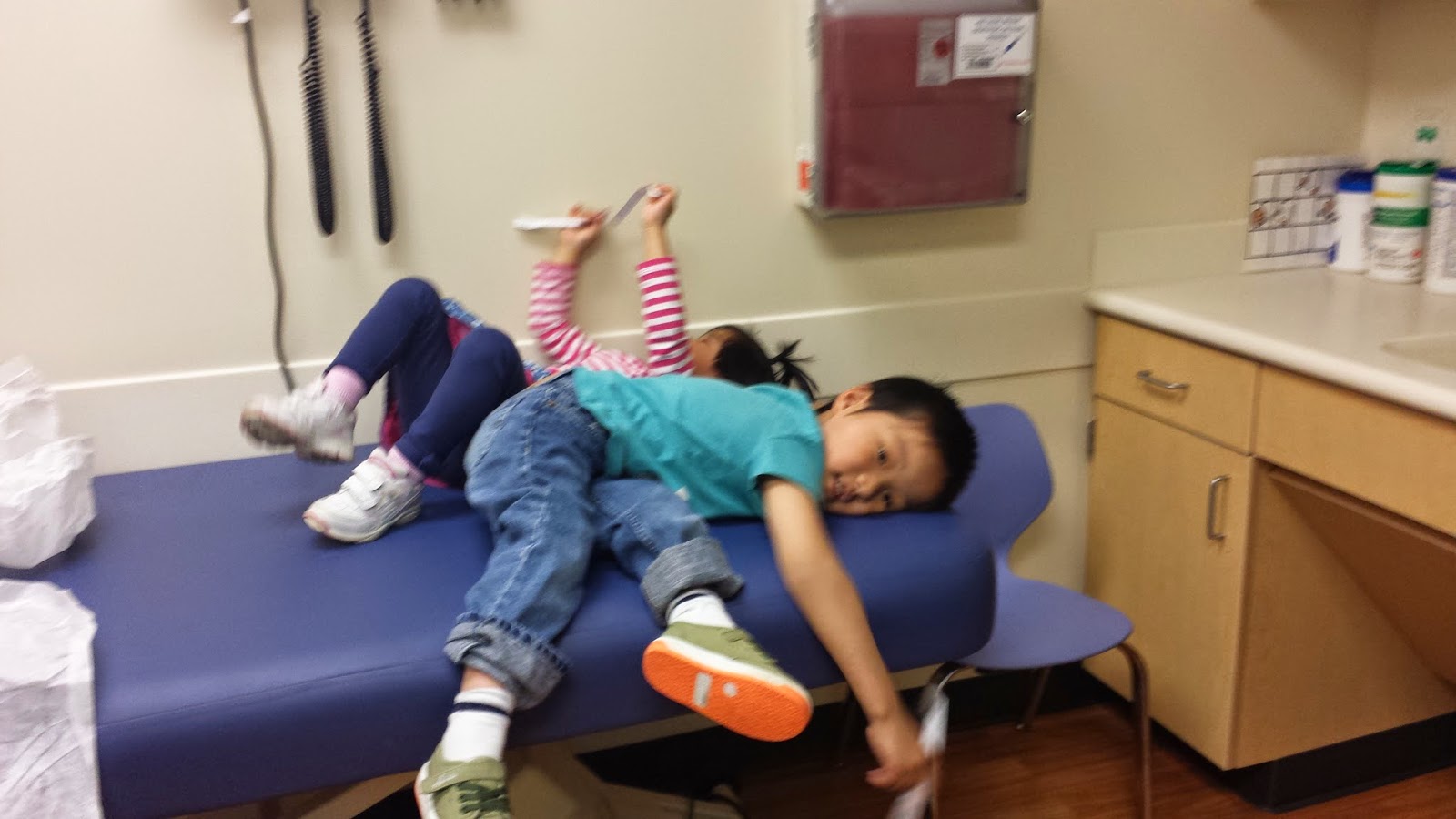 As the title (and the above picture!) say, the past few weeks have been full of doctor visits.  For Jonathan and Gabrielle.  For me.

That's what happens when you have a family of special needs kids and one of the parents has a chronic conditions.  You get to know your doctors really well.

First off, Jonathan and Gabrielle had an all day visit with the International Adoption Clinic at Cincinnati Children's Hospital.  When I say all day, I mean ALL DAY.  We got there at 8:30 and got home at 3:30.  It was rough, but the kids were troopers.  The only hiccup was when they each had to have 14 (yep, 14!!) vials of blood drawn.  I'm more than used to having my blood drawn, but even I was taken aback by that one.  There were lots of screams.  Even now, a week later, Jonathan still talks about the "OW" on his arm. 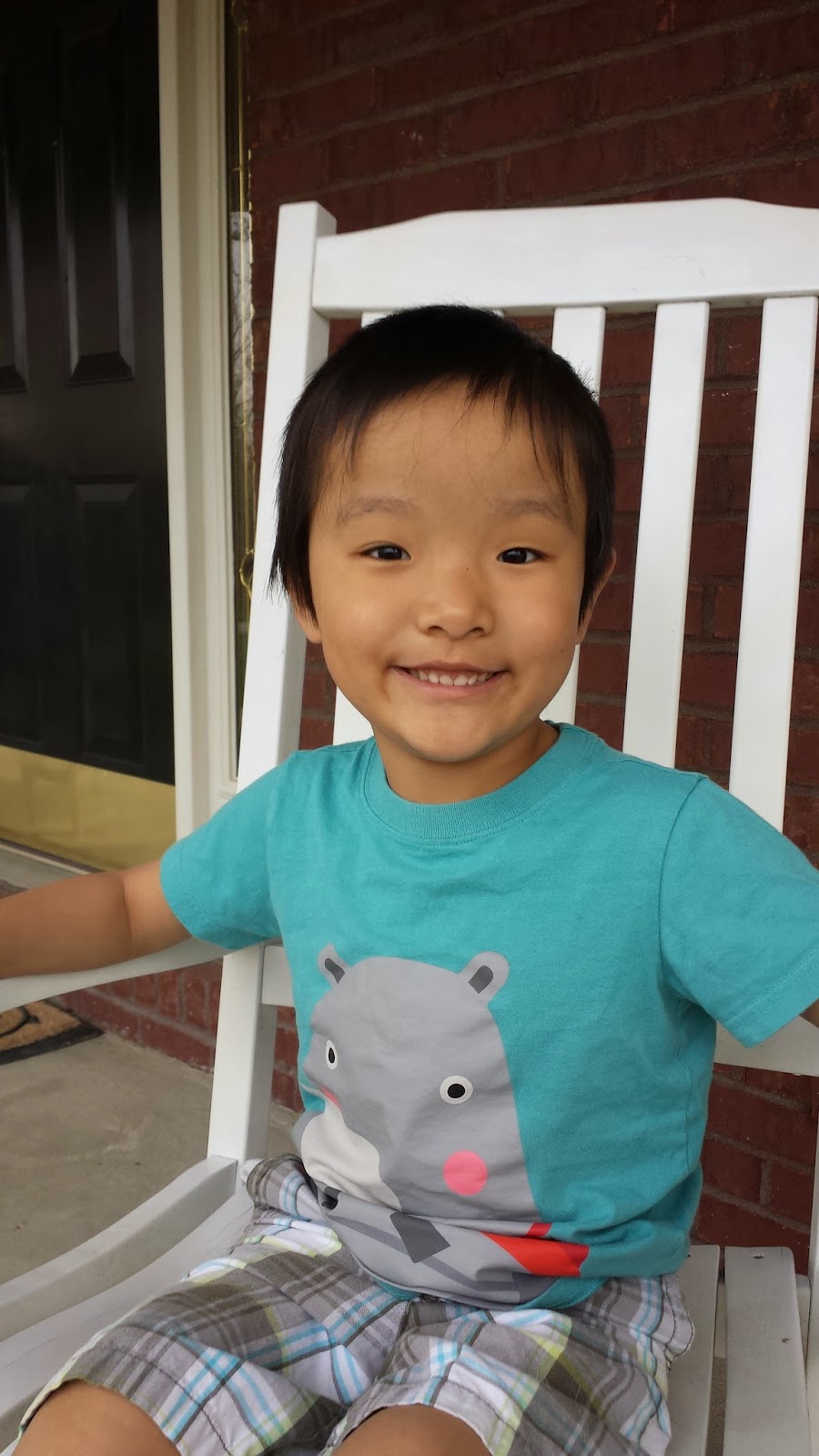 So what did we find out?  Well, neither of the kids has any communicable diseases (always a possibility when adopting internationally).  Jonathan has had the mumps (YIKES!) and Gabrielle has had chicken pox.  Gabrielle is a little behind in her fine motor skills and verbal skills.  Jonathan is on target with everything except gross motor (obviously.)  In the next month, Jonathan will be seen by specialists from the Spina Bifida clinic.  That's where we'll start the in-depth SB treatment which will include urology and bowel workups.  Also, he will have scans of his back and head.  His head is a little large (okay, it's actually pretty big.  Steve and I call him Melon Head.  Affectionately of course!) and the doctor wants to see whether he needs a shunt for hydrocephalus, always a possibility with SB.  He will also be measured for a better fitting wheelchair, which we'll all be happy about.  The one we have for him now is way too big.  He can't manage it easily and as a result, I have to push him while corralling Grace and Gabrielle.  Not.  Fun. 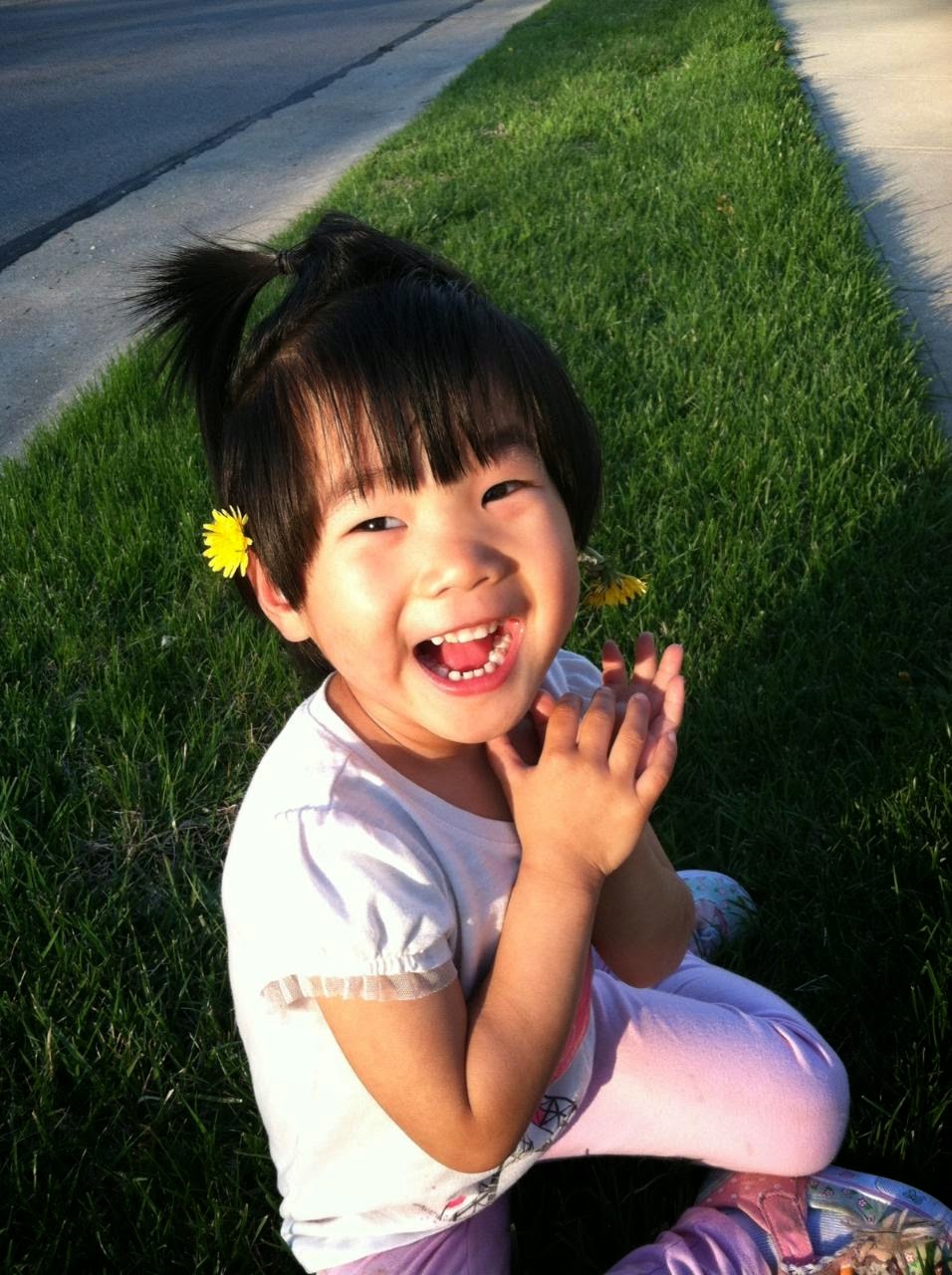 Gabrielle will also be having a brain scan so that the doctors can get a better idea of what's going on with the cyst and enlarged ventricles in her brain.  When we got to China, we found out that she also has a pigeon chest, so she'll be having a chest x-ray.  Eventually, she'll probably need either surgery or a brace for that, but it seems to be mainly a cosmetic issue so we're not worried about it.  She will also need to see an ophthalmologist.  Her right eye drifts and sometimes she says it hurts.  Both kids will need to see dentists.  Gabrielle's teeth are especially bad.   I realize this sounds like a lot, but it's really par for the course with international adoption.  First off, these are special needs kids.  We knew what we were signing up for when we started.  (And BTW - even with 2 kids, it doesn't even come close to what we went through with Grace!)  Also, you have to figure, even with non-special needs kids, children who have been in an orphanage often don't have access to medical care.  Even in the best orphanages, there just isn't the money for it.

So our next few months will be busy, but that's nothing new, and it's something we expected.  Honestly, this adoption is still our easiest adoption by far.  Yes, we still have behavior issues.  Lot's of behavior issues!  But I try to remember IDC.  Doesn't always work, but I'm trying.

Above, I also mention that I had some doctor's appointments.  As most of you know, I have Crohn's disease.  Every time I get run down, it acts up.  Over the past few weeks, I've been having a lot of abdominal pain.  Sometimes it was so bad I thought Steve might have to take me to the ER, but I never had a fever--big indicator that something is Seriously Wrong--so I stuck it out at home.  On Saturday I had an ultra-sound and everything looks good.  We think scar tissue is causing the pain.  I've had five abdominal surgeries in the past 11 years.  In the words of one of my surgeons, my insides are "glued together."

What happens is I get tired, my muscles loosen, and the scar tissue starts pulling.  The only way to solve this is another surgery to clear out the old scar tissue, which--you guessed it--causes more scar tissue.  So right now I'm just trying to get lots of rest.  Ha!  I know, not easy.  But one of the good things about having a big family is that when I'm out of commission, everyone else pitches in.  Unfortunately, my kids are used to me having to take time out to deal with Crohn's.  The other day when I was lying on the couch, Caleb came over and said, "Mommy, you just rest.  We'll take care of you."  And they did.  Even Jonathan brought a blanket over to me and covered me up.  Just.  So.  Sweet.  I hate that they have to deal with it, but they're troopers, and as a result, I'm finally starting to feel better.

Which is great because in the next few weeks, I should be getting my editor's notes on my book.  Which means I'll have to disappear into my writing cave and make more changes to the novel.  In the coming weeks, I'll be talking about that process and get into the work I've been doing for Book Two.  (Yep, I've been working in the midst of all of this chaos.  I have to, writing keeps me sane!)