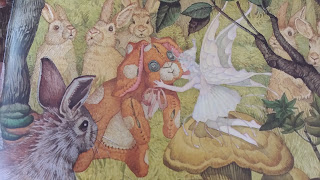 A few days ago, my youngest son, Caleb, asked me to read him a story before he went to bed.  Reading before bedtime was something we did regularly when the kids were younger, but then they grew up and decided that they were "too old" for bedtime stories.  So, when Caleb asked me to read to him, I happily said, "Yes!"

Then I did something I wasn't sure he was going to like.  Instead of choosing one of his chapter books, I decided to re-read the stories I read to him when he was little.  I want him to know why I say, "I love you to the moon and back."  Or where this song comes from: "I'll love you forever, / I'll like you for always, / As long as I'm living / my baby you'll be."  I have great memories of reading him (and my other kids) these books and I wanted him to be old enough to have his own memories of the books.

I decided to start with my all-time favorite children's book, The Velveteen Rabbit.  If you've never read the book, it's about a stuffed bunny who is so loved by a little boy, that the bunny becomes real.  I have loved this book since I was a little girl.  In fact, when I was pregnant with my oldest son, Zach, my mom and I were out and found a beautiful copy of the story at Walden's books (that shows you how long ago this was.)  It was the first book I bought for him, and I read it to him when he was still a baby.

We snuggled up on the couch and I started reading.  Pretty soon, my oldest son, Zach (who had said that at 10, he was too big for this) sat down on my other side.  As I read, he lowered his head to my shoulder.

At least five years had passed since I last read this story.  I was in my forties this time, instead of my thirties.  My boys are now interested in Mine Craft and Power Rangers instead of Pooh Bear and Thomas the Train.  I wondered if the book had lost some of its magic the way clothes you loved a few years ago seem silly when you pull them out of your closet now.

I was only a few pages in when I realized the magic was still there.  In fact, I saw things in this reading that I had never noticed before.  In the following passage, the velveteen rabbit asks the skin horse how toys become real:

"Real isn't how you are made," said the Skin Horse.  "It's a thing that happens to you.  When a child loves you for a long, long, time, not just to play with, but REALLY loves you, then you become Real."

"Does it hurt?" asked the Rabbit.

"Sometimes," said the Skin Horse for he was always truthful.  "When you are Real you don't mind being hurt."

"Does it happen all at once, like being wound up," he asked, "or bit by bit?"

"It doesn't happen all at once," said the Skin Horse.  "You become.  It takes a long time.  That's why it doesn't often happen to people who break easily, or have sharp edges, or who have to be carefully kept.  Generally, by the time you are Real, most of your hair has been loved off, and your eyes drop out and you get loose in the joints and very shabby. But these things don't matter at all, because once you are Real you can't be ugly, except to people who don't understand." 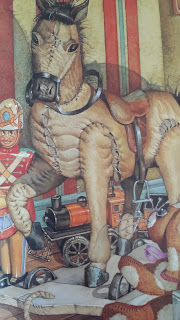 Some of my hair has been "loved off", my joints are stiff, and I switched to bifocals last year.  When I look in the mirror, I see lines that weren't there a week ago.  I have more scars than I care to count.  Yet I'm happier now than I ever have been.  I am becoming Real.

You see, Real isn't only for toys.  It's also for people.  But like the velveteen rabbit, you don't become Real all at once.  It only happens after you've been battered around a bit by life.  When your mother dies.  When you get sick and there is no cure.  When your child is crying and the only thing that helps her is a hug from you.  When you're up to your elbows in mulch and your little boy tells you you're beautiful.

Most of the time, becoming Real doesn't happen when you are young and beautiful and can run without your knees aching.  It happens after life has rubbed all of your sharp edges down.  And that takes time.  In our culture, we value shiny and new more than Real.

I think about this a lot now that we are adopting again.  The children we're adopting are a little older.  They have medical issues.  One of them is paralyzed from the waist down.  Life has already battered them around a bit.  I haven't met them yet, but I suspect that they are already well on their way to becoming Real.

They are children most people overlook.  Most of my children are.  And yet they've helped me more on my journey to become Real than anything else.  When I was younger, I never dreamed I would have six kids.  Even more so, I never dreamed that five of those six kids would have "special needs".  (Actually, since my biological son was 10 weeks early, he'd probably be classified as special needs too.)  Like most people, the term "special needs" scared me.  I thought there was no way I could handle a child with Major special needs.

Now I know better.  Now that I'm further along on my journey to becoming Real, I realize we all have "special needs."  Some people's needs are just easier to see than others.  If there's one thing my children have taught me, it's that we're all the same inside.  It's only the packaging that's different.  As the Skin Horse said:

"But these things don't matter at all, because once you are Real you can't be ugly, except to people who don't understand."

Posted by Stephanie at 8:00 AM