Why writing is important 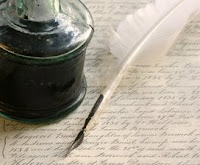 This week, I taught a class for a professor friend of mine who was sick.  It was an undergraduate fiction writing class, and let me just get this out of the way--I was Impressed.  These writers were on the ball.  The knew what they were talking about when they critiqued their peer's work.  The stories they handed in were well written and interesting.  It was Good Stuff, people.  I'm telling you, Good Stuff.

I came away from the class inspired.  Here was a room full of students who were passionate about writing.  Some were English majors.  Others were not, but they all had one thing in common--they wanted to write.  So they did.  They knew how difficult it is to make it as a writer, but they wrote anyway.

Writing is Hard Work.  You don't just sit down and doodle out a story in 15 minutes then sell it for millions of dollars and become the next J.K. Rowling.  No.  Not even close.  Not even a little bit true.  Let me say it again.  Writing is Hard Work and there's no guarantee of a pay off (I mean a monetary pay off).

So why do it?  Why are these kids sitting in a creative writing classroom when they probably realize they'd have a better shot at finding a good job if they were sitting in a computer programming class?  Because writing is important.

Yet words have the power to change things.  What do dictators do when they come to power?  They burn books.  Even fiction (maybe especially fiction).  Why?  Because stories transform the way we see the world.  They open our minds to new possibilities and new ways of thinking.  That's monumental, world changing stuff.

Now, not every book is going to impact the entire world, but think back to when you were a child.  What books shaped your world view?  I'll bet you can name several that you still cherish all these years later.  We knew parents and teachers had the ability to mold a child's life, but writers?  How often do we think about writers having that kind of power?

Not often enough.  In fact, sometimes it seems the only people who realize the power that books have are people who want to ban books.  I think it's about time the rest of us stand up and say, (to ourselves and those writers around us) Writing is important.  Keep going even when you want to stop.  Even when it's hard.  Even when you think no one cares.

Because the truth is, someone does care that you're out there, working as hard as you can on your manuscript.  I care.  And so do a lot of other people.  Because what you're doing matters.  What you're doing is important.  It matters.
Posted by Stephanie at 9:27 AM