When I first started writing seriously, I had a list of reasons why I couldn't write. I wasn't good enough. I didn't have enough time. Mom's don't really do that kind of thing. I'm taking time away from the kids. They'll be scared for life. I need to walk the dog, cook dinner, fold laundry...you get the picture. As a result, when I finally decided that I wanted to give this writing thing a try, I had to wade through a whole bunch of mental junk before I could even sit down and write. I suspect a lot of you went through similar experiences. Oh, and let's not all those rejection slips. You finally work through your stuff, write a great story/poem/article/etc. only to get rejected. Ouch.

Yesterday, I had to go to the ER. Some of you know that I have Crohn's disease. It's an autoimmune disease like Lupus or MS. Living with it means my life is a little bit like tip-toeing over a rickety rope bridge stretching over a bottomless cavern. I can go to bed feeling great, then wake up at 3:00 am and have to go to the ER (yep, that's happened). Some days are good. Some days (like yesterday) are not so good. 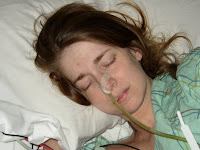 2003 in ICU
The thing is, Crohn's could easily become a reason/excuse to stop writing. I can't tell you the number of times I've planned to write, only to end up curled up in bed in pain. I have Crohn's disease and four kids, one of whom is autistic and developmentally delayed--carving out writing time is a challenge. Sometimes, I want to scream, "NOT FAIR!" Sometimes, I want to quit. Sometimes I want to be that person I was years ago, who had a million reasons not to write. The thing is, we all have reasons not to write. You might not have Crohn's (and I pray you don't) but you've got something else.